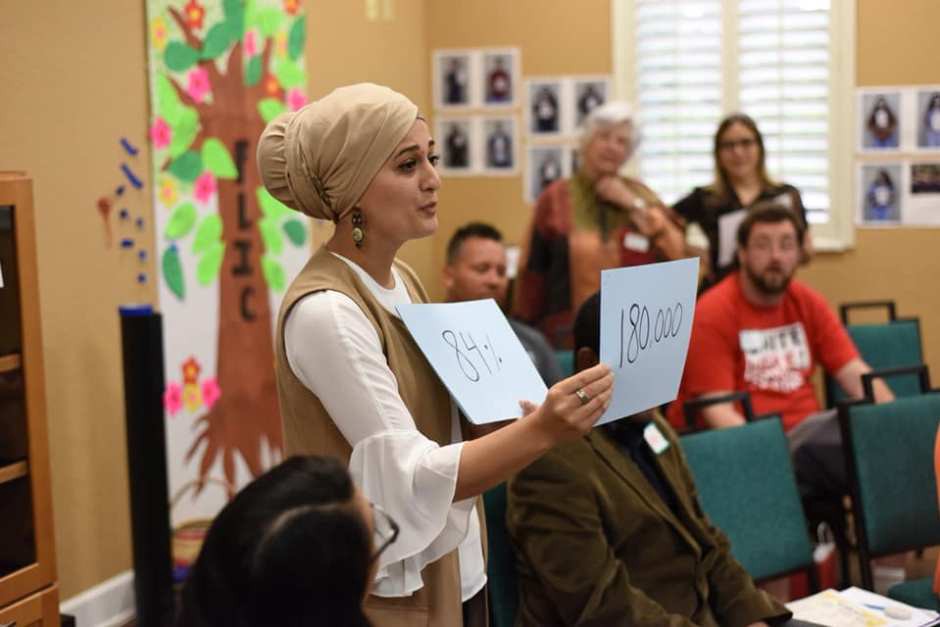 Basma’s passion for advocacy is rooted in her own experiences as a former refugee from Iraq; a true champion for the rights of refugees and immigrants, using her own story to empower others and effect change on a national level.

Meet Basma Alawee, a force for change in the refugee community. As the National Campaign Director for We Are All America at National Partnership for New Americans, Basma oversees organizing efforts in 21 states to push for policy changes and support for refugee communities. But her impact doesn’t stop there. In 2019, she founded Weavetales, an organization that develops storytelling training programs and amplifies the voices of over 300 refugees and immigrants.

Basma’s passion for advocacy is rooted in her own experiences as a former refugee from Iraq. Her tireless work has earned her numerous accolades including the Jacksonville EVE Award in 2020, Athena40’s “40 Under 40” in 2021, and Grant Thornton’s Purple Paladin in 2022. She is also an Honorary Delegate with the Refugee Congress and serves on the US Refugee Advisory Board, where she previously served as a refugee advisor on the US Government Delegation to UNHCR’s annual Executive Committee.

Basma Alawee is a true champion for the rights of refugees and immigrants, using her own story to empower others and effect change on a national level. She’s a woman you should be paying attention to, she’s making a real difference in this world.

By increasing your knowledge, participating in efforts to support refugees in your community, and expressing your views to your elected representatives, you can actively contribute to creating a welcoming environment for those seeking a new home in your community.

Basma Alawee founded WeaveTales in 2019 with the goal of helping refugees harness the power of storytelling and create more welcoming communities.  The organization empowers refugees to share their personal stories, providing support and a platform to raise awareness of the ongoing crisis and bridge cultural divides within communities. More than 300 refugees have shared their stories. The refugees involved with the organization describe the opportunity to share their stories as a form of healing.