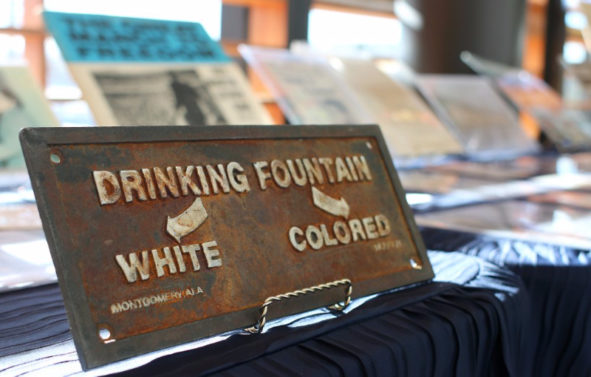 Over 20 years in the making ! This is an interactive table-top exhibit of black memorabilia spanning slavery to hip hop. Includes a day-long exhibit with the option for a one hour lecture by professor and museum curator, Dr. Khalid El-Hakim.

The museum has over 7,000 rare treasures among its collection, including original documents from historic Black figures whose contributions helped shape the United States. Artifacts in this unparalleled mobile collection represent items from the categories of slavery, Jim Crow era, music, sports, the Civil Rights and Black Power era, and popular culture.

In 2011, Dr. Khalid el-Hakim, the museum’s founder and curator, celebrated the twentieth anniversary of the BH101MM. Inspired by Dr. David Pilgrim, his former Ferris State University professor, el-Hakim stands on the shoulder’s of the great archivist of Black culture and history such as Arthur Schomburg, Dr. Margaret Burroughs and Dr. Charles Wright. Khalid has been called “the Schomburg of the hip hop generation”.

“My mission is to raise the consciousness of the human family by sharing artifacts that celebrate the contributions, achievements, and experiences of African Americans”

Even when we have black history month, we’re only still learning about Martin Luther King Jr. , Rosa Parks, Harriet Tubman, Slavery, Civil Rights – but if you walk through the Black History 101 Mobile Museum Exhbit, you will see a lot more than that. This exhibit fills in some of those gaps, causing people to have deeper conversations about some of the things we’re still going through right now.

Dr Khalid El Hakim truly believes in the power of strong teaching. He says that he reads the stories behind the artifacts he collects, and that those who came before us, left a blueprint on how to deal with racism in America. As he teaches, he’s also evolving. Being from the hip hop generation, growing up in the 80s – he had initially dismissed politicians, for various proper reasons. However, putting together numerous exhibits, has made him a fan of many politicians like: Barbara Jordan, Sherly Chisholm, Adam Clayton Powell, etc. He wasn’t taught about these individuals in school. Going through this process allowed him to truly appreciate their contribution.

Collecting this memorabilia and putting together a traveling black history mobile museum – around various themes (Salvery to Hip Hop, 65’ exhibit, Drum Majors for Justice, Civil Rights, Three M’s : Martin, Motown & Michael , etc.) has opened the minds of thousands across America , to the truth about Black history in America. It has also helped recognize the contributions of black people to American society despite the lynchings, segregation, and systemic racism. If we don’t go back and learn their stories and contributions, we end up spinning our wheels. It’s important to begin where they left off. Learning and continuing their work is the proper way to celebrate their legacy.

“I want people to walk away as inspired as I’ve been as a collector and student of this history.”

Take a glimpse at one of the many exhibits presented by museum curator and professor Khalid El-Hakim. In the past twenty years, he has been able to collect over 7,000 artifacts related to black history, that fill in the missing links of a story that needs to be preserved and learned from.