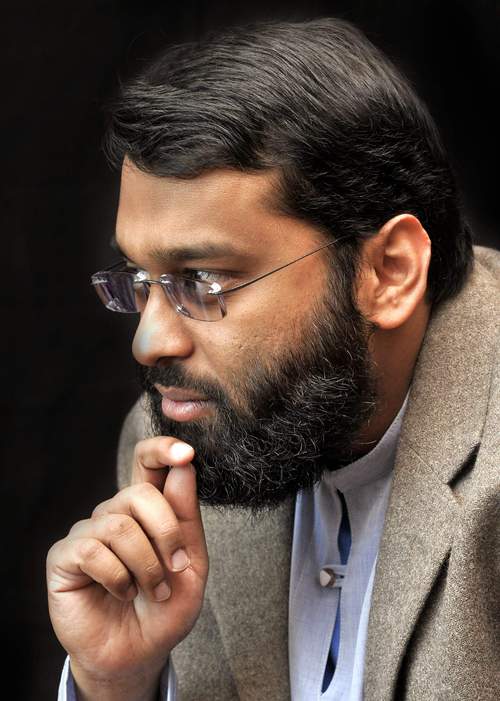 Dr. Yasir Qadhi has written numerous books, and lectured widely on Islam and contemporary Muslim issues. A 2011 New York Times Magazine essay described Qadhi as “one of the most influential conservative clerics in American Islam”. He has a powerful and energetic speaking style that is matched with scientific information, historical context, and critical analysis. Dr. Qadhi is a strong critic of how extremists use religious claims to justify their violence – – so much so , that ISIS put out a statement calling for his death. Why is he threat to them?  Watch his video on “American Foreign Policy and the Rise of ISIS,” below, and book today for a feature presentation.

Yasir Qadhi, PhD, is a resident Scholar of the Memphis Islamic Center, a professor at Rhodes College in the Department of Religious Studies, and is the Dean of Academic Affairs at AlMaghrib Institute. He is one of the few people who has combined a traditional Eastern Islamic seminary education with a Western academic training of the study of Islam.

Yasir graduated with a B.Sc. in Chemical Engineering from the University of Houston, after which he was accepted as a student at the Islamic University of Madinah. After completing a diploma in Arabic, he graduated with a B.A. from the College of Hadith and Islamic Sciences, and then completed a M.A. in Islamic Theology from the College of Dawah. He then returned to the United States, and completed a PhD in Religious Studies from Yale University.

Dr. Yasir Qadhi has authored several books, published academic articles, and appeared on numerous satellite and TV stations around the globe. His online videos are some of the most popular and highly-watched Islamic videos in English.

“Memphis professor and cleric Yasir Qadhi is being targeted by the Islamic State group.”
– The Washington Times

“ISIS has declared that a Rhodes College professor — a key figure in American Islam — is an apostate who deserves to be killed.”
– Inside Higher Ed

Understanding The Roots of Radicalism

United States Foreign Policy and the Rise of ISIS

Shariah Law: Islamic Theology and the US Constitution